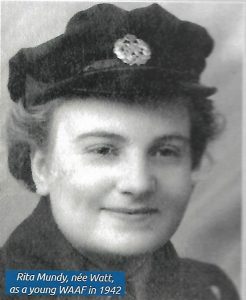 I am delighted to be able to announce that Rita Munday has accepted the position of President of the RAF Mountain Rescue Association.

Rita who, as Rita Watt, was a member of the RAF Millom MRT from 1941-43, so like Tom Scudamore was involved in life-saving rescues before the MRS was formally created.  Born in Edinburgh in 1922, Rita joined the RAF as soon as she was eighteen, did her basic training at RAF Morecombe, and, as a “Clerk Admin” was then posted to RAF Babdown Farm, three miles from Tetbury. In 1941 she was posted to RAF Millom at the soutern end of the Lake District where she joined the MRT and stayed with the team until 1943.  She described life at Millom as generally like a holiday camp, she loved the lakes and the mountains and for relaxation she would regularly cycle from Coniston to Widermere.  She now lives in Southend-On-Sea, Essex – not known for either it’s lakes or it’s mountains.