A day that will be long in our memories.

Sometimes you have one of these incredible days on the mountains yesterday was one of them. I have been recovering from my eye operations and had promised that if I could I would join the family of the late Joss Gosling Ex RAF Kinloss MRT up to the place he loved for what would have been his 90th birthday.

Joss was a member of the RAF Kinloss MRT that located the Lancaster crash in the winter (March) of 1951. It took months for the team to locate all the casualties. Joss was only a young man at the time he took some incredible photos here and RAF Mountain Rescue learned so much from this tragedy.

I left early from home as was picking up a pal Derrick Harman who is recovering from an operation and we arrived at the car park below Beinn Eighe a two hour drive. The hills had fresh snow on them but the views were outstanding.

We were met by Joss’s daughter Heather and her brothers Ian and Andy at the Corrie Dubh car park. There we were met Granddaughter Sarah and so many of the family. We were also fed by Heather with tea and Lorne sausage rolls and got sorted out for the hills.

A few more arrived Pete MacGowan aged 82, Tom Taylor and Willie MacRitchie the man in charge of the RAF Mountain Rescue Teams. All were ex Kinloss Team Leaders and true heroes of mine. They had all come to honour Joss and the family. I could see this would be a special day. We also had Geoff a relative of the crew who had driven up from the South. Sadly all the crew died in the crash in 1951.

My friend Kalie arrived, followed by more family members, Calumn and his wife, another grandchild. It was about 0930 when we left for the hill.

The day previously the RAF Lossiemouth MRT had been up to the Corrie and replaced the rusty plaque with a slate one to commemorate the tragedy all these years ago. This was great of them and their efforts were appreciated they were met as they came off the hill and fed by Heather and family before they headed to Skye for the weekend. 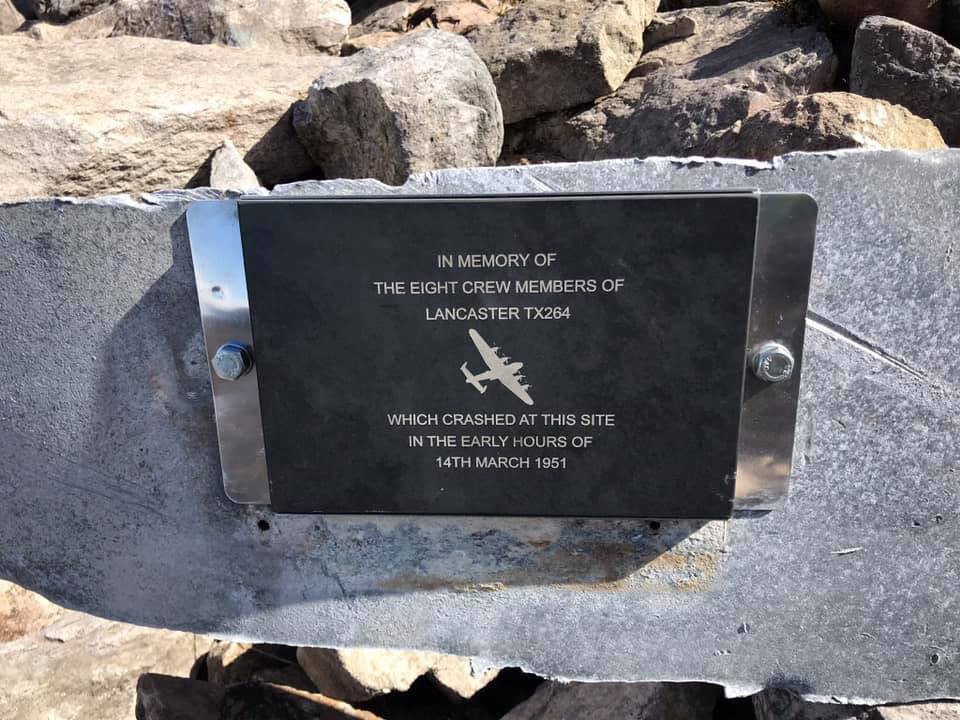 It was a great wander up the superb path telling the story of the crash in 1951 all the way up as we walked around Beinn Eighe. I showed the family the steep ground where the Kinloss Team brought the casualties down off the hill all these years ago, with simple gear and equipment. We stopped often and enjoyed the views, we had a bit of rain then the sun came out and, as always, the views are outstanding. This would be a special day and one we would treasure.

We passed around the bulk of Beinn Eighe and up past the waterfall onto the lochan where the views get even better. You cannot see these cliffs till you get up to the Boilerplate Slabs just before the Loch. This is a cathedral as Joss stated the first time he saw this place in that wild winter of 1951. He explained this to me many years ago, it is a Cathedral, a place to worship nature and the wild. We had lunch here out of the wind and then round the Loch with stunning colours on the water as the shadows raced across it. 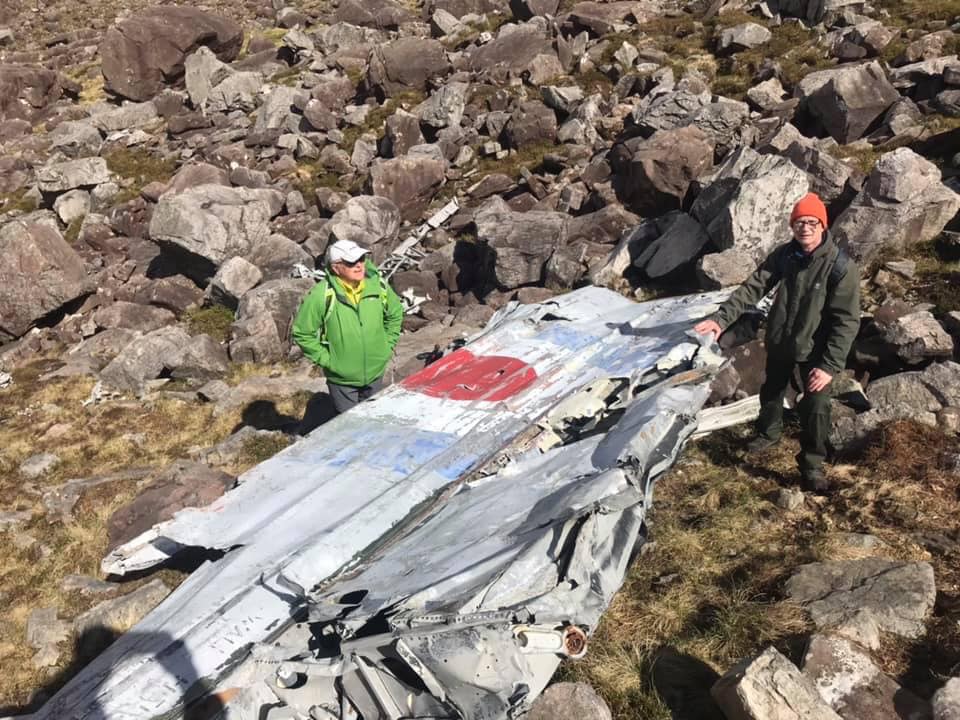 We could see Fuselage Gully where the main wreckage still lies, with winter snow still present as we wandered into this incredibly wild spot. All the time I was telling the family more of the story of the crash and the wild winter the team and locals encountered. There are photos of the Team that Joss took walking across the Loch frozen hard with snow.

It was a big break here at the main wreckage we pass the tyre, the wind and wreckage and then arrive at the propeller. The family said a few words about a great husband, father, Granddad and friend dearly loved by all. Heather then produced Joss’s old boots that he used in 1951 and we took photos of them at the propeller. 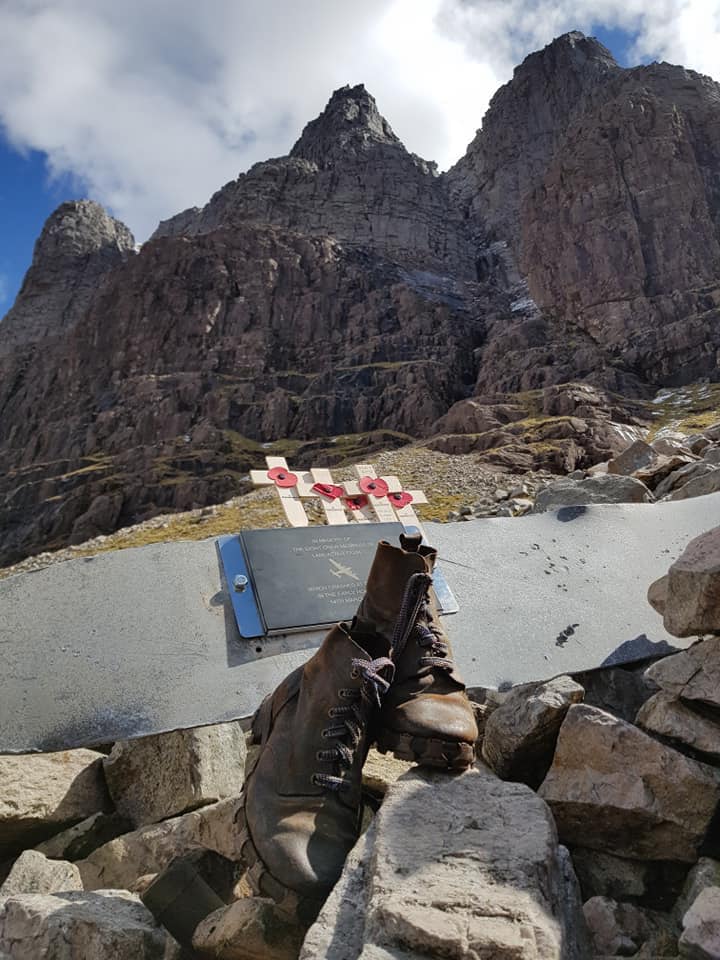 Ian, Joss’s eldest son, produced my poem about Beinn Eighe and it was extremely emotional yet a happy event. He spoke as the great cliffs watched it was a powerful place to be.

We finished with a dram of Joss favourite whisky Talisker.

It was then a few thoughts of the crew. Geoff was here again reminding us of those who died here in this majestic mountain cathedral. It was then head back each thinking of Joss and this place. The sun was hot and the snow-capped summits looking like a painting. The way back took a few hours, we never rushed, had lots of breaks and drank in the views. It was so good to have made the journey, There were all ages but what great folk.

I never take these days for granted and we were soon down, met in the car park by Annie (Joss’ wife) and Ian’s wife. It was emotional, Annie gave us all a huge cuddle. The others went back to get ready for a meal and I went back up the hill to meet Ian, Willie, Pete and Tom coming down. As we get older we slow down even these titans of Mountain Rescue do. We had a laugh at our ageing and then the group headed to the Hotel for a meal. We had to head home a long drive for me with Derrick. We popped into the Hotel to say goodbye and then a stunning drive home.

What a day, we gave Joss a send-off to remember thanks to so many who made it all possible. Thank you to nature for giving us a special day and some incredible weather. 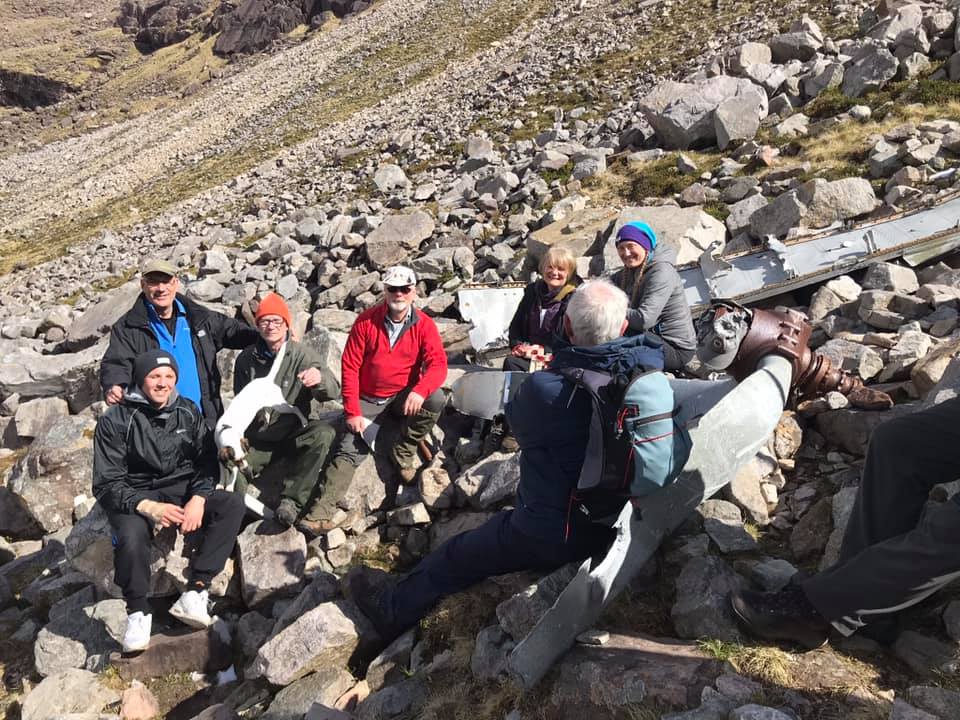 Unseen from the road.

Majestic cliffs are hidden by ridges and wild corries.

A long walk in, views expand as we climb.

A familiar family of deer by the boulders,

They have been there for many years and are friends.

What have they seen?

The views of moor lochans,

Waterfalls sparkle in the sun.

At last, the lochan.

great cliffs glisten in the snow.

wreckage glints in the sun.

This is a wonderful poignant place.